Mars Maiers is a bayesian game, a social trust experiment and a blockchain study—all played out as a year long art project. It was created by Jacob Bijani and Allan Yu. This is the first sealed-bid auction (aka silent-auction, or blind-auction) built on the L1 Ethereum blockchain. You can view our custom contract here.

A sealed-bid auction means you won’t know the number of bids or the highest price for any given auction until it is settled, even though all bids are committed to the blockchain. We’ve bent a transparent, decentralized, and immutable blockchain protocol into doing something it wasn’t originally designed to do.

Each auction will settle with a reveal of the artwork, the number of bids, the highest bidder, the winning price, and the daily AES-128 encryption keys to prove that all bids on-chain are accurate.

The game began on January 1, 2022 and is now underway. Good luck and happy bidding!

To make this a sealed-bid / silent auction, we obscure (D) the “auction day” your bid was placed on using AES-128 encryption. Every “auction day” has its own unique encryption keys. When a user places a bid using our site, we hash a string containing the “auction day” they wish to bid on and their wallet address. We call this a bid token, and they are unique to each user + day pair.

The user then creates a transaction using their bid token, and sends the value they would like to bid. Our off-chain backend reads the incoming transactions, and is able to decrypt the bid token and understand what “auction day” the bid refers to. When settling an auction, it sorts the bids and picks the highest cumulative value.

Once a day’s auction closes, we publish the encryption keys used to create the bid tokens for that “auction day”. This way, you can review past transactions and confirm nothing was tampered with off-chain. See below for more information on how to decrypt bid tokens.

How to Decrypt Daily Keys?

1. Go to a bid transaction on etherscan and tap on “See More”

3. The input parameter is your encrypted bid token.

4. Go to the day that you believe this transaction to correlate to and find that day’s encryption key and IV (initialization vector). 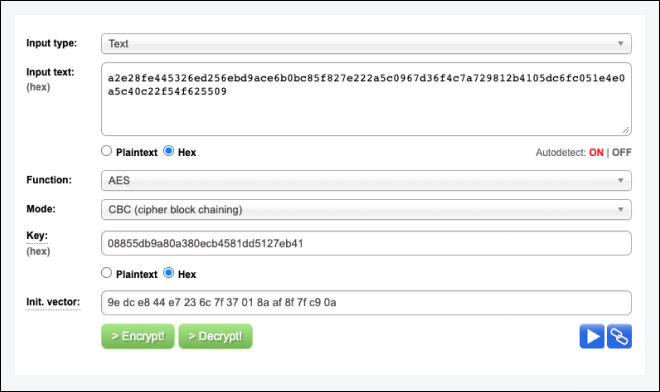 5. Use any AES-128-CBC algorithm to decode the bid token using the key and IV. You can use an online decryption tool like aes.online-domain-tools.com, (with which we have no affiliation). Be sure to enter the input values as hex.

6. If you entered everything correctly, you should see a string of ASCII text. The format is “DAY-OF-YEAR;WALLET-ADDRESS”, which should match the bid’s day, a bidder’s wallet address.

7. As you can see here 001 is day 1, and 0xe7b... is the bidder’s wallet address. This hash, which was created for the bid and submitted to the blockchain prior to the auction being settled, is proof that the on-chain bid is accurate.